The world of leadership is tough and complex – that’s always been true and is even more so today.

Leaders are constantly bumping into a minefield of contradictions. For every year-end review that tells you to be warm and connect with your people, there’s another that says to be competent and know your industry. For every leadership book that advises confidence is key, there’s a podcast that says vulnerability is crucial. For every expert that urges you to be positive, enthusiastic, and optimistic about the organization’s agenda, you will find another who says you should be transparent about the challenge ahead.

The most effective leaders develop the capacity to hold the tension of Both/And. They discover an expanded way of seeing and being that taps into the value of both this and that. They learn to be warm and connect while being competent in what they know, they show up with confidence while also allowing people to see them, they are optimistic about where they are headed and grounded in the reality of where they are. The KPI is a practical and transformational tool that helps individuals and teams expand their impact by increasing their capacity to lead from a Both/And perspective.

See and Make Sense of Your Reality

Polarities are one way to honor the complexity of leadership and uncover where conflicts surface. The KPI helps leaders see and make sense of fundamental paradoxes that persist over time.

“Best of This and That”

This leader could be described as someone who moves tasks along and brings others along in their decisions without being seen as a “taskmaster” or “people pleaser.” They likely value accomplishment and connection, which contributes to their ability to deliver results as well as engage their people. 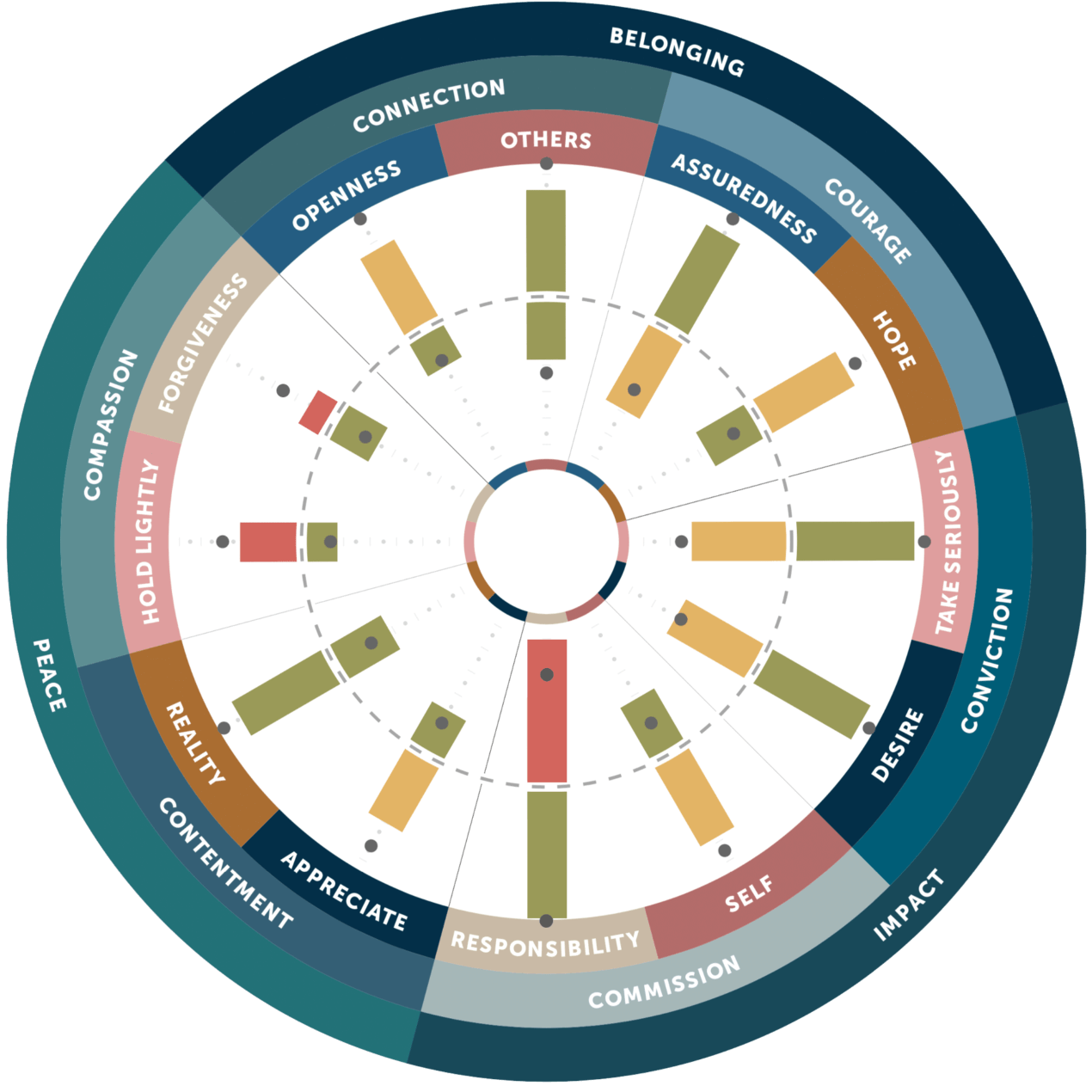 “Either This or That”

This leader might view themselves as “the reliable one” and described as a leader who takes ownership, but may not be quick to also show understanding when someone doesn’t live up to their expectations. They may also be seen as overly critical and could feel burdened by having to do it all. It is likely this leader holds a strong value for commitment, positively contributing to their ability to make an impact. They might also fear being seen as soft or weak, leaving them with a desire for a fuller sense of inner peace. 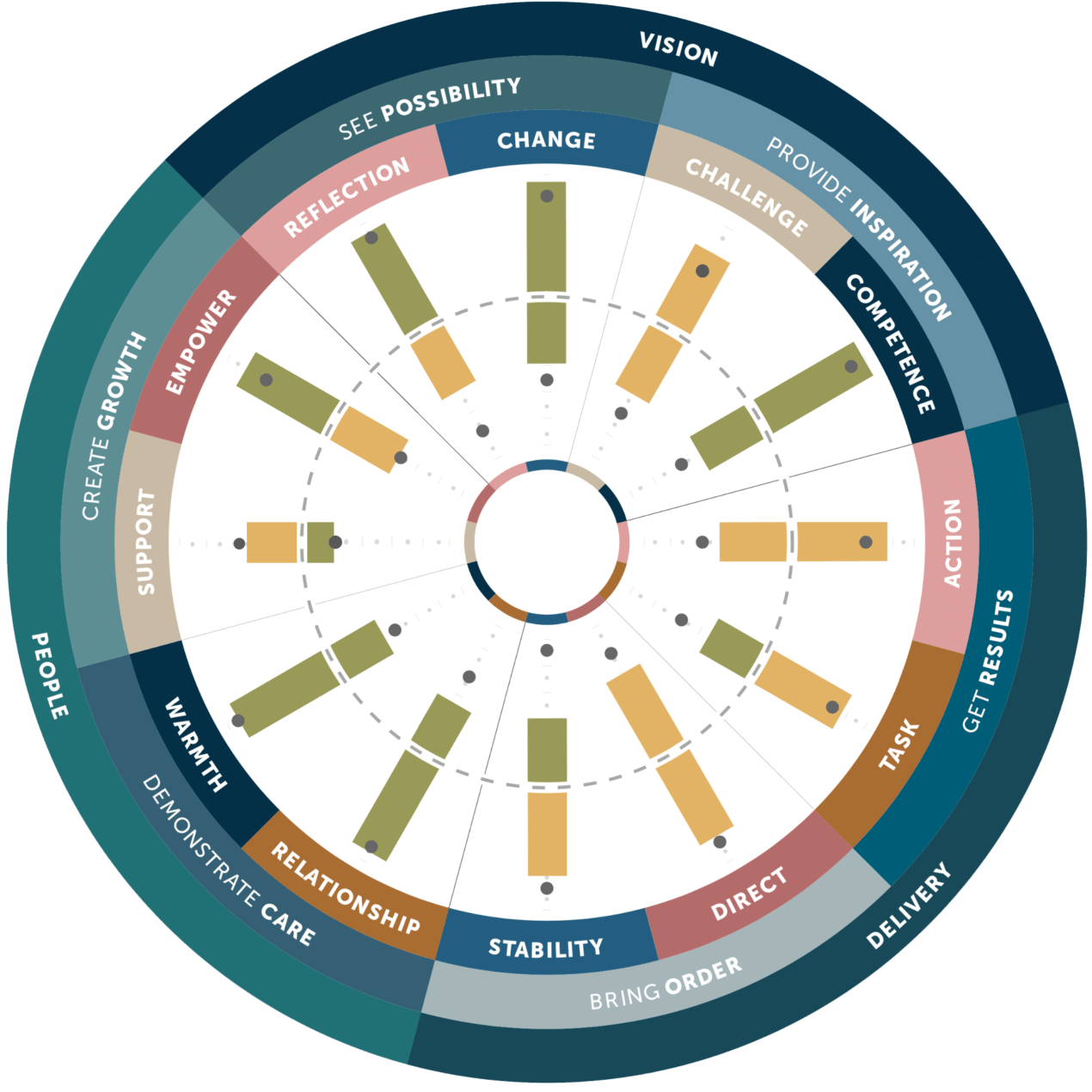 A leader who could be described as someone who stretches people to accomplish bigger and better things and provides the encouragement needed to take risks. Under stress or pressure, they are likely to prefer “the push” and might be at risk for pushing too hard, too far, or too fast. Their value of challenge contributes to their ability to provide inspiration and if taken too far could get in their way of creating the space and support for people to grow.

“Mind altering”, “Really great way to see what is going on inside and outside yourself”  “To see how your fears of the overuses of your less preferred pole drive your mindsets and behaviors.” “Polarity thinking is amazing”.

Step out of Suffering and into Success

When we learn how to navigate polarities, success follows. When we fail to notice polarities or unconsciously mistake them for a problem to solve, suffering is likely.

When groups encounter a polarity and don’t have a way to make sense of it or understand it as an interdependent pair, they experience a series of stages called Suffering Paradox.

Giving preference to one pole over the other

“people are just drawn towards one side [of a polarity] or the other”
“you know both are important, but one’s just more important”

Wedding oneself to a pole (at all costs)

“it’s amazing how people can be tied to their way of seeing things”
“you get deeply attached and put on blinders that make it difficult to put yourself in another’s position, or hear what it is they have to say, because you are so dug into your position”
“that’s what brought me to this profession, that’s what I’m known for, it’s my passion…and I’ll fight for it when push comes to shove”

Creating “the Other” to personify the tension

“make one side of the argument the good guys and the other side the bad guys.”

Problem solving from an either-or mindset

“[Even if you wanted to] it’s hard to hold both options in mind”
“…it’s my way, or the highway…”
“you just get stuck in black and white…look at Congress”

When a group can see the polarity and has a way to make sense of it, the tension in the dynamic can turn into a creative force rather than a destructive one – experiencing a series of stages called Navigating Paradox.

Using a sensemaking tool to see, discuss, and embody

“you are in the middle of so much and it’s just too much for your brain, there’s so much going on”
“it is not just the map itself, but [also] the process of having the conversation”
“don’t have to worry about trying to hold it all at the same time”
“When people first walk into the room, you can sometimes feel tension and see it at the ends of the table, but [during Mapping] there are some visible things that happen…there is a different tone in the conversation…you know, voices change, pronunciation changes, it is actually really cool”

Seeing and sharing a fuller picture of the past, present, and future

“[it was] a life-changing moment”

“[it makes you] see the world differently”

“when it clicked, I was like, Wow! Wow! [pause, then quieter] Wow. It was like, ‘oh, my God, that’s amazing’ – it really was. I mean, it felt, it just explained so much and helped us see it so differently.”

“pointed and said, ‘Look! We were way over here which is why we ended up wanting the change…it’s not because we didn’t know what we were doing…see, we ain’t crazy!”

“you can see into the future to see what’s going to happen. Things are Ok now, but we’ll end up [in those downsides] if we don’t watch it”

“the light bulb goes off and [they are] like, I get it…that’s why we can’t reorganize because we’ll just end up over there”

“it was such a relief to know that we don’t have to solve this, we just have to stay on top of it”

Understanding Self, Other, and We

“it hit me that to succeed, we’re going to need both of us”
“like it or not, I could see the positives and negatives of my perspective”
“that’s why certain things (or people!) push my buttons the way they do”
“you can see what matters to them, what they care about, what’s important to them…you basically get to see them in a whole new way”
“because the things I valued were listed right there in the upsides, there’s no need to, you don’t have to protect them [because they are on the map]. I don’t know, I just felt I could talk about them differently, like why I valued them. It’s just a different conversation than having to fight for them.”

“I’ll never really be successful if we don’t have both [poles],” and for some, “that is a major A-Ha!”
“there is space here for both of us to gravitate back and forth”
“we need to find a way to get both…whatever that is”

Both/And leaders make more informed decisions, develop greater trust and respect in relationships, build more engaged teams with higher morale, and drive better results. They also have the capacity to embrace ambiguity, thrive in complexity, and adapt to the constantly changing demands of the business.

Organizations that develop Both/And leaders are more willing to experiment and fail, share critical feedback to enable learning and ongoing adjustments, and remain more relevant over the long term.

We’d love to connect with you to learn more about your needs and explore how the KPI could help.